Imam Khalid Shahid was born and raised in Jackson, MS, the son of a Baptist preacher and devout Christian mother. He received a Bachelors’s degree from the University of Southern MS and an Ijazah (A license/Diploma authorizing its holder to transmit a certain text or subject) from Zayd’s House of Islamic Culture’s Imam training program in Al Ain, Abu Dhabi, UAE. He has been married to Bettie Shaheed for 42 years and they have 3 children. He has been the resident Imam of Dallas Masjid Al-Islam for 14 years.

Originally a member of the Nation of Islam, he accepted and converted to orthodox, mainstream Islam, following the Quran and life example of Prophet Muhammad,(May Allah bless him and grant him peace), under the guidance of Imam Warith Deen Mohammed in 1975. He is a member and one of the founders of Faith Forward Dallas, North Texas Islamic Council Executive Board, a member of DFW Muslim-Jewish Council, IQRA Intrafaith council, National Black United Front South Dallas, Dallas NAACP and is a supporter/participant in Dallas Safe Conversations program. He is the founder of MECA (Masjid Al-Islam Children’s Academy), the founder of the Beacon of Light outreach and co-founder of DFW Islamic Charity Day which is now called the Day of Dignity and established daily prayers at Masjid Al-Islam, with Allah’s permission, Alhamdulilah (All praise is due to G-d).

In July of 2016, he was invited to the White House to be part of the first-ever Muslim Holiday celebrated at the White House. President Obama was the host of this historic event and the event took place in the ultra-elegant East Wing of the White House. 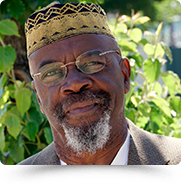